For most non-French visitors to Cote d’Azur, their trip begins in Nice as their plane sets down in what is France’s busiest non-Paris airport, but more often than not that is the last they see of the city until they return to catch their outbound flight.  This is unfortunate because Nice is the heart and soul of Cote d’Azur, and it has been so for a long, long time and has aged magnificently.

In fact, it has aged so well that as one who has spent a dozen years living on Cote d’Azur, I feel that if you only had only had time to see one place in the region, it should be Nice.  This reflects an historical bias, but it also considers the wonderful scenery; abundance of lovely walks; good restaurants; and a liveliness that can provide a good time for all.

To fully appreciate Nice, though, it is helpful to recognize its historical importance and how much of its “history” is still there to be seen.  At times, I feel that because it has weathered its history so well and is so modern in appearance, its historical importance is easily overlooked.  When taking a leisurely stroll along the beautiful Promenade des Anglais along the Bay of Angels, it is hard to imagine just how much Nice is a part of an ancient world that included Greek traders, Roman soldiers, Saracen raiders, ambitious Anjevin rulers, a 17th century Italian building renaissance and that for almost 500 years – 1388 to 1860 – was part of a Turin-based Savoy.  Not so hard to imagine is that from that latter date, 1860, until the start of the Second World War, Nice was one of the primary northern Mediterranean destinations for English-speaking visitors.

One does not have to go far from the Promenade des Anglais that follows the sea from the airport in the west to Castle Hill in the east to view Nice’s history.  The Greeks left behind, only a name – their settlement in 350 BC was called Nikaia – but Roman Nice, then called Cemenelum, was the capital of its Alpes-Maritimae province, and was primarily in the hills above the city in the Cimiez neighborhood where there is still an amphitheater built at the end of the 2nd century AD and the remains of the largest Roman bath complex in France.

If you are looking to see Nice in historically chronological order, then the park that includes this Roman complex is a great place to start.  It is only about 15 minutes by car from center city, but parking is difficult so a taxi is not a bad idea.  If driving, it is suggested you take a right off the Boulevard de Cimiez before getting to the top of the hill and then go two blocks and turn left on Avenue Bellanda that usually has plentiful parking just south of the park.  This visit is a must as the park includes not only the Roman amphitheater and baths, but also the Matisse Museum, a historic Franciscan Monastery and a beautiful garden that overlooks the city.  Across the street to the north is what was once the Hotel Excelsior Regina, the most impressive of the city’s Belle Epoque hotels that today is an apartment simply called the Regina, but no less impressive now when viewed for a distance. 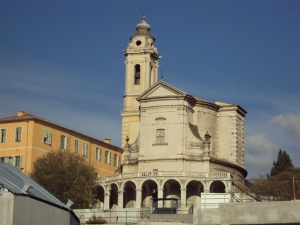 Not far from these ruins in the midst of a hospital complex and overlooking the east side of the city is the resilient Abbaye-de-St.-Pons that dates back to the late 8th century.  It was destroyed by Saracens in 899; rebuilt and then destroyed again by the Turks in 1543; and is best known as the place where a pact was signed in 1388 between John Grimaldi of Nice and Duke Amadeus VII of Savoy that began Nice’s 500 years as part of Savoy.  The Abbaye is not open to visitors and hard to approach, but if you are driving north on Route 19 from center city to Peage 8, it is quite impressive looking down at you from a hilltop on the left.  It can also be seen looking north from the garden by the Franciscan monastery.

Nice was a relatively quiet place between 1388 and the 17th century building renaissance except for the late summer of 1543 when in one of the continuing wars between the long serving King of France, Francis 1st, and Spain’s Charles V, who also controlled Savoy, resulted in a combined French and Turkish invasion of the city.  Much of city was destroyed and many residents killed or taken captive, but its fortifications on Castle Hill were never taken.

For visitors, there are two reminders of this calamity that is known as the Siege of Nice – the monument to Catherine Segurane on Rue de Segurane just north of Castle Hill and Fort Mont Alban.  Catherine is a Nice heroine who was given credit for driving the Turks out of Nice either by grabbing the standard out of the hands of the Turkish standard bearer and rallying the local citizens or, in another version, by lowering her bloomers and showing her ample bottom to the Turks, which so offended their Muslim standards that they turned and fled.  Fort Mont Alban was constructed by the Savoyards in response to this attack on a hill overlooking Nice and the nearby Villefranche and is still there for all to see.

Nice’s sojourn into Savoy and its Italian influence made the city more Italian than French and gave it a large, historic and lively Old Town that is the first stop for most visitors as it is near the center city and the Promenade des Anglais.  Much of what is in Old Town dates back to the 17th century and its many churches feature an Italian baroque style of architecture.  The most prominent of these are: 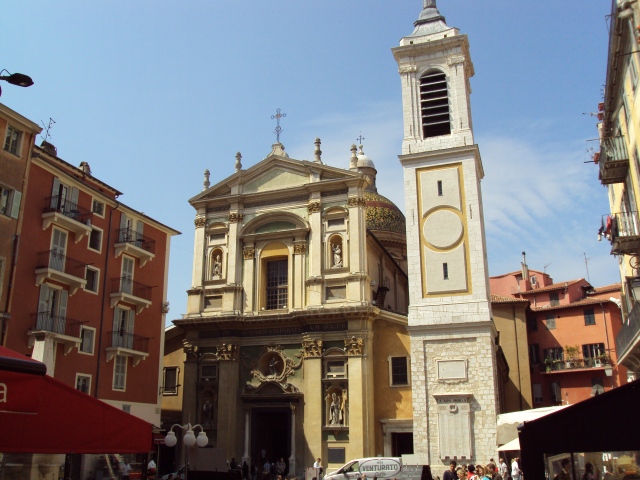 Also in Old Town, the Palais Lascaris was constructed in Genoese style in 1648 by Italian nobleman and general from nearby Ventimiglia.  It was restored in 1946 and is open to the public.

There is no set pattern as to how to tour Old Town as it nice to just wander and see it many charms, but there are three main arteries.  The north-south Rue de Marche for shopping; the east-west Rue de Prefecture that takes one within a block of almost all key sights – and from there just look for church steeples; and the can’t be missed Cours Saleya with it morning flower and food markets and endless restaurants with seating in the middle of the road when the markets close.

The 18th and early 19th centuries were busy times for Nice, but not so good for building.  During these years Nice was caught in the middle of the many wars of Louis XIV of France, the Sun King, and his successors as well as the French Revolution.  In one of the Sun King’s occupations of the city, he destroyed the fortifications on Castle Hill above Old Town.  On a more positive note, it was during these years the charming port on the far side of Castle Hill was created to provide better sea access to the city.

Note: This blog includes excerpts from my book, A Travelers History of Cote d’Azur.